Yonatan Tesfaye appeared before Federal high court lideta division 4th criminal bench on 28 Nov 2016 with his defense witnesses as he was adjourned for defense witnesses hearing. Accordingly, the defendant has brought his witnesses to the court except three of the defense witnesses; Dr Merera Gudina for he was abroad, Befeqadu Hailu for he is in detention under the state of emergency command post and Dr Dagnachew Assefa for he was not informed of the adjournment. 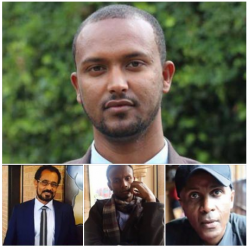 Even though the majority of the witnesses appeared before court, the defendant requested the court to give him another adjournment to hear witnesses for he said he needs more time to talk to witnesses about the points they would testify via his defense lawyer. As learnt during the court session, some witnesses were not informed about why they appeared before court. For example, jailed prominent journalist Eskinder Nega told the court that he was just brought to court without being informed why he was called. “I have not received any letter or notification. I was called to the office in the morning and brought to here without any prior notice. So I need to have some time to prepare to testify” said Eskinder to the court.

As per the defendant’s request, the court has adjourned to Jan 4-5/2017 to hear defense witnesses. In addition to witnesses, Yonatan has submitted documents as defense evidences.