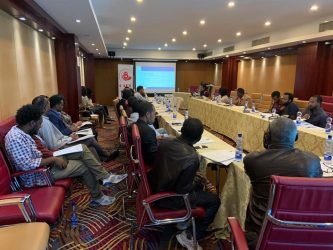 CARD has conducted a workshop on the changes in Ethiopia’s electoral laws reform on January 17th, 2020 at Intercontinental Addis Hotel. The Ethiopian Electoral, Political Parties Registration and Elections’ Code of Conduct Proclamation 1162/2019 is a merger of three previous laws revised and adopted following Ethiopian government’s promise to reform the political space. The workshop, which was attended by 24 digital media practitioners, has hosted an expert briefing on the legal changes as well as a question and answers session between the expert and participants. The workshop was led by Soleyana Shimeles, Communications Advisor to the National Electoral Board of Ethiopia and member of a working group in the legal reform process.

The objective of the workshop was to raise awareness and create a discussion platform on the rationale and implications of legal changes of Ethiopian electoral system with online content producers.

The event was generously funded by Freedom House and at the end of the workshop Atnafu Brhane, Program Director of CARD, concluded the workshop by inviting the participants to take the lead in actively engaging during and after legal reforms. In addition to the workshop, CARD has run an online campaign to raise more awareness on the electoral laws reform of Ethiopia. It has also published a booklet for journalists reference [in AM] and distributed it online and offline for public access.