Federal high court has given another adjournment on Kedir Mohammed et al case to November 16, 2016 for ruling. Qilinto Federal prison administration has failed to bring defendants on today’s hearing.
On October 19/2016 hearing, the federal high court Lideta bench was expected to pass decision on whether the defendants should defend themselves or shall be acquitted after evaluating prosecutor’s evidences presented against the defendants. However, the defendants including the two Radio Bilal journalists Kalid Mohammed and Darsema Sorri were not brought to court. 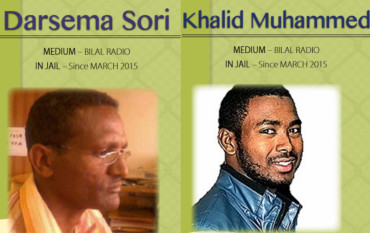 On the other hand, defendants have presented human rights violations complaints via their lawyers to the court demanding an order to end mistreatments in custody. According to the complaints, defendants asked the court to give order to the prison administration so that they would be treated according to the law and get the chance to be visited by families and lawyers.

Defense lawyer Seid Abdela has submitted the written complaint to the 14th bench of federal high court at Lideta. The mistreatment by the Qilinto prison administration is a violation of article 25 of the constitution and Directive number 138/99 of the Federal Correction Centers Administration, the complaint stated. As to the complaint, such human rights violations on the defendants by the prison administration have intensified following a “fire accident” on Qilinto prison in September 3/2016. Defense lawyer Seid told the court that his clients are now transferred to Shewarobit and Zeway federal prisons following the “accident”.

Hence, families and relatives are forced to travel 163 and 200 KM. to visit their loved ones in Zeway and Shewarobit prisons respectively. However, families are not allowed to see detainees due to their religious dressings, as a result defendants couldn’t receive the meal brought by families. Besides, defendants are not allowed to talk to their defense lawyers. Defendants (via their lawyers) demanded the court to call and inquire the prison administration and give appropriate order to end the mistreatments that are in violations of the constitution.

Court adjourned the case for November 16/2016 to receive response from Qilinto prison administration on the complaint presented by the defendants.

Meanwhile, journalist Darsema Sori who is one of the defendants in this file is seriously ill and has been hospitalized in the police hospital.