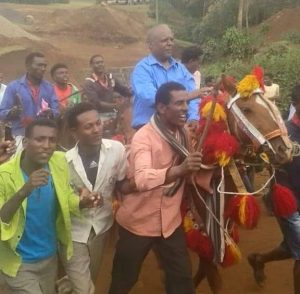 It was remembered that jailed Oromo Federalist Congress (OFC) leader Dr. Merera Gudina has requested bail on 03 March 2017 hearing. And federal prosecutor submitted his objection of bail request on 09 March 2017 to the court.
Accordingly, Federal High Court Lideta Branch 19th criminal bench has given verdict on the bail request in March 10/2017. The court has denied bail to Dr Merera Gudina saying that the charge brought against him would be punishable by death or life sentence as the first accusation is in violations of article 32/38 and 238 of the criminal code that does not permit bail rights. Hence, court ordered police to transfer Dr. Merera to Kality prison.
The opposition OFC leader Dr. Merera Gudina has delivered a speech after hearing that the court denied him bail. Here is his statement:-
“Starting from Gen. Mengistu Neway and Gen. Tadesse Birru for more than one generation, in a country’s politics where the killers, killed ones, jailers, jailed ones are many, as an academician who puts his country’s wellbeing before his interest, I have been at the center of the struggle to a better Ethiopia for over 45 years. but knowing this fact, the court rejected my bail request, let it be known, that as if being charged with a crime because of my struggles to create a just and democratic Ethiopia is not enough, to be denied a right to bail, which can even be conferred to an ordinary criminal let alone someone like me who has once served as a parliamentarian, causes a deep sense of anguish not only on me but also on the people of my country who are fated to live a life of misery.”
The next hearing is adjourned to April 24/2017 to receive preliminary objection over the charge.
Dr. Merera Gudina was arrested while returning from Europe after testifying human rights situations in Ethiopia for European Union, in December/2016.