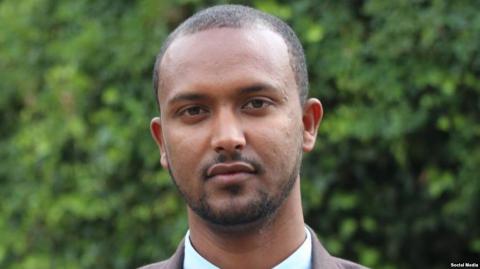 “I exercised my right to freedom of expression” Yonatan.

Federal prosecutor charged former Semayawi Party public relation officer and human right defender Yonatan Tesfaye on terrorism charges saying he was trying to draw out the Oromia region protest. Court dismisses all preliminary objections presented by the defendant on May 23, 2016.

It is known that the defendant Yonatan on his objection inquire the court to dismiss all terrorism charges against him and be released free. Federal prosecutor on his side gave response for the objections. Judge Tarekegn Amare who led the bench said the court after examined both petitions and gave the verdict.

The defendant said though on the charge the prosecutor mentioned that   “. . . the defendant was trying to elongate the protest and violence by writing inciting articles on his Facebook page ” he claim it is not related with the mentioned anti Terrorism proclamation article 4 and criminal law article 112 and that it is not act of terror.  The court ruled against the defendant saying it will be seen while the prosecutor brings witness and evidence.

The writings of the defendant and the action claimed in the charge are all protected under the federal constitution and all are freedom of expression and the defendant asked the court to dismiss it from the charge and be released freely. The court said the constitutions article 29(6) place exceptions to the rights of freedom of expression and since the prosecutor claim on the charge that there were destruction of property and all will be seen while prosecutor present evidences and overruled the objection of the defendant.

The defendant also put out that the charge is not clear at all and evidences of the prosecutor are not disclosed. Court again over ruled the objection on a ground of protection of witnesses in the anti terrorism proclamation.

All in all the court gave verdict against the defendant on the entire preliminary objections. Following that the court asked if the defendant can give his word if  he commit the crime or not.  Yonatan was asked if he commit the crime on the charge or not? He said “I did not commit the terror act as it is presented in the charge. But I exercise my right of freedom of expression and write, I did not commit a terror act, I am not guilty”

As the defendant pleads not guilty the federal prosecutor requested the court to allow him to present witness. The defendant on his part said if the prosecutor witness are going to testify what they saw in his face book he asked the court to take notice that since he has never failed to acknowledge what he wrote in his own face book, bringing the witness on the same issue of what he actually admits would only be delaying justice.

Prosecutor argued saying he has the very right to present witnesses. Court ruled for prosecutor and ordered to bring witnesses on July 27, 2016.  On the other said Yonatan Tessfaye gave the court written grievance mentioning that he has now spend two weeks in the dark room in Kilinto detention center and asked court to review and give ruling on his  inhuman detention situation. Though the defendant requested short appointment about his detention, court decided to hear from the administration of the detention center on the next trial on July 27, 2016.