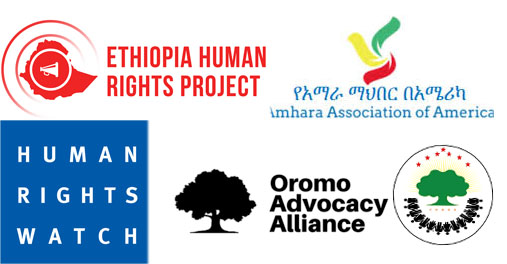 Ethiopia is at a crossroads.  On Monday, April 2, a new Prime Minister, selected from within the ruling coalition, delivered a speech about planned reforms while the country was under another State of Emergency. At such a juncture, amid mounting pressures, the role of the US, Ethiopia’s longstanding international ally to encourage critically-needed reforms and human rights protections, should not be underestimated in urging the country toward a new era of stability.

The undersigned human rights and diaspora groups fully support the passage of House Resolution 128 for the positive contribution it can make toward respecting basic human rights and encouraging inclusive governance in Ethiopia.  The resolution has strong bipartisan support and more than 100 co-sponsors.  In addition, H. Res. 128 has significant grassroots support among constituents across the US who have ties to Ethiopia. It calls on the government of Ethiopia to open up civic space, ensure accountability for human rights abuses and promote inclusive governance.

For the past three years, Ethiopia has faced largely peaceful and sustained protests in the Oromia and Amhara regions of the country.  These protests were led by youth seeking opportunity, political reform and more participatory development strategies. The government responded with excessive force. More than a thousand protesters have been killed by Ethiopian security forces, a greater number injured, tens of thousands imprisoned and many tortured for expressing grievances. Over a million, mostly from Oromia, were uprooted due to government-instigated conflict in the Eastern part of the country.

However, a combination of forces has accumulated in support of the protesters – diaspora groups and international human rights organizations helped publicize the protest movement in Ethiopia and the government’s violent response; the US Congress rallied behind H.Res. 128; international news outlets gave frequent coverage of the protests.  At the dawn of this new year, the EPRDF coalition announced reforms and some changes began to occur.  Close to 7000 political prisoners were released in January and February of 2018, Prime Minister Hailemariam Desalegn stepped down within days, and Dr. Abiy Ahmed, a man with ties to the region most impacted by the protests, was put forward by the coalition as Ethiopia’s newest prime minister.

In light of these beginnings, now more than ever, it is imperative that the United States Congress take a stand that reiterates the need for Ethiopia to take further steps in a democratic direction by passing H.Res. 128. Ethiopia’s previous transfers of power indicate that leadership change is often followed by unfulfilled promises, a culling of opponents and power consolidation. If Prime Minister Abiy is truly committed to breaking that pattern, this resolution will encourage Ethiopia to lift the State of Emergency, ensuring freedoms of expression and assembly and opening up democratic space, all prerequisites for political and economic reform.

1)    H. Res. 128 is a signal of support for the youth in the country who have organized to peacefully demand justice and democracy and have paid a terrible price in terms of loss of life, injury and arbitrary detention.  Accountability for the human rights violations that have occurred over the last 3 years will be an essential step towards genuine reconciliation and is a key demand from the protesters.

2)    H.Res. 128 contains clauses that could strengthen the hand of the Prime Minister vis-a-vis less responsive segments within the EPRDF party coalition structure, requiring negotiation with the forces that control the country’s security apparatus, intelligence and the economic sectors.

3) H. Res. 128 contains clauses that call on the State Department and USAID to develop a comprehensive strategy to support improved democracy and governance in Ethiopia.

4) H. Res. 128 contains clauses that call on the Secretary of State and Secretary of Treasury to apply appropriate sanctions on individuals and organizations responsible for gross human rights.

We support passage of H.Res. 128 as a means to send a strong, unambiguous signal that the United States Congress requires concrete reforms.  Such reforms are needed to create a path toward improved respect and protection of human and civil rights, political stability and sustainable regional security.

We urge members of the House to pass the resolution.

Coalition of Oromos for Human Rights and Democracy