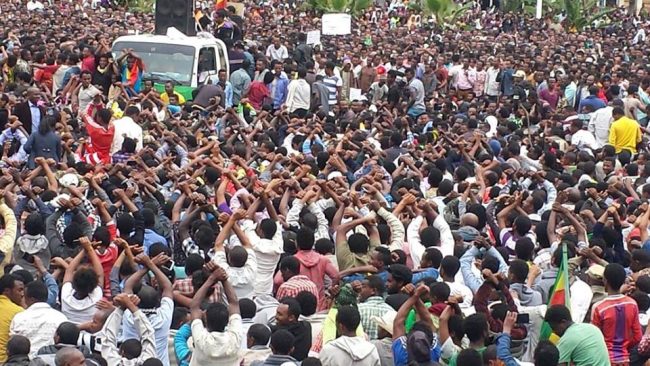 Following the July arrest and detention of representatives of the Wolqait Amhara Identity Committee in Gonder by the government’s Antiterrorism Taskforce, protests erupted in many areas of the Amhara region. The first of these protests took place on August 1st in Gonder town in which thousands of people took to the streets to denounce the arrests of the committee members and a range of other actions by the regional and federal governments.

Other demonstrations that took place in different parts of the region turned violent with security forces firing live bullets killing over 50 protestors in one day of protest on August 5 in Bahr Dar town, the capital city of the Amhara region.,

Under the orders of Prime Minister Hailemariam Desalegn, to take all measures necessary to contain the protests, police and army units used massive force that caused death and injury of hundreds of peaceful protesters. Thousands of others have been detained in military camps such as Birrsheleqo while many others were forcibly taken from their homes and never heard from since then. The government’s move to shutdown internet and phone services particularly in the areas of the region where intense protests were taking place made it extremely difficult for EHRP to interview victims and witnesses and other informants. As a result EHRP has not been able to compile information and data that shows the full extent of the human rights violations perpetrated by security forces in connection with the protests. Accordingly, the following list of victims is to show only what EHRP was able to compile and corroborate through various sources.

Table – Name of the people who have been killed and places

Denouncing the government action, Ethiopian Human Right Project (EHRP) demand the government to make responsible those government agents who take actions, permit independent body to investigate and refrain from killing of its own people who demand their basic human rights.

As much as possible the investigation and collecting of information will continue on behalf of Ethiopian Human Right Project. If you have any additional information about Amhara protest and related issues please do contact as in our social media and our email address. ( ehrproj@gmail.com )