In a file of Gurmesa Ayano et al. (22 persons) which includes the Deputy chair of OFC Bekele Gerba, the Federal prosecutor asked the court to hear its witnesses in a closed session.

The 4th bench looking the case at Lideta High Court has adjourned the trial for today [November 15] to hear the witnesses for prosecution, but the prosecutor asked a closed session for the security of its witnesses in a complaint written on November 14th.  The prosecutor has mentioned Anti-Terrorism Proclamation (652/2001) and 699/2003 Article 4(1) (I) A Proclamation to provide for the protection of witnesses and whistleblowers of criminal offences in his complaint. He asked the court to consider the weight of the crime the defendants are charged the witnesses were also part of the crime and have been living in a same surrounding with the defendants, if they witnessed in public trial they or their families may be exposed to an attack. 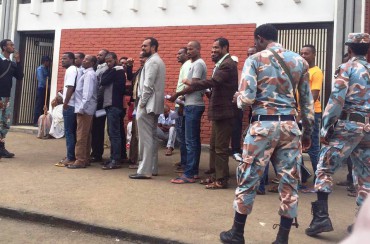 Three issues stated in the Article 20 of The FDRE constitution (i.e. to protecting the right to privacy of the parties concerned, public morals and national security) may make the court to hear the case in a closed session, Because the request of the prosecutor doesn’t include at least one of them they asked the court to reject the demand and hear the witnesses in a public trial. The lawyers of the defendants asked the court to consider the status of the defendants, the weight of the crime they are charged, the close follow up people of Ethiopia and the diplomatic community to make the trial open to the public.

The court adjourned the trial for the next day to rule out on either closed session or public trial after hearing the arguments of both sides.

All the defendants appeared on November 15th hearing.