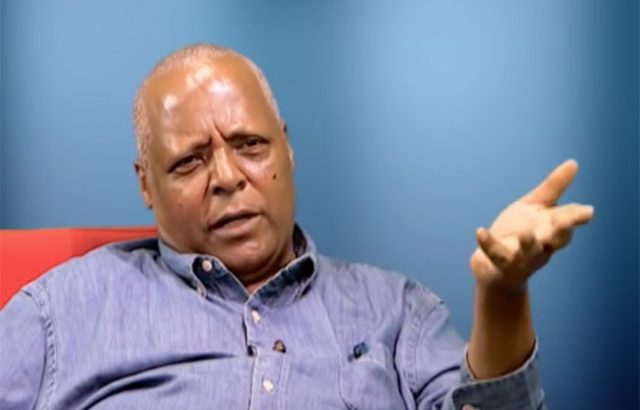 Oromo Federalist Congress (OFC), a legally registered opposition party, leader Dr. Merera Gudina who was arrested while returning from Europe after testifying at the EU parliament on human rights situations in is now officially charged with multiple offenses.

Federal prosecutor opened the charge file on 23 Feb 2017 in the name of Dr Merera Gudina and four others are charged with him. According to the prosecutor’s charge sheet, defendants on this file are Dr. Merera Gudina (leader of OFC), Dr. Berhanu Nega (leader of the outlawed AG7), Mr. Jawar Mohammed (Executive Director of Oromo Media Network (OMN)), Ethiopia Satellite Television (ESAT) and OMN, the media houses themselves. Of these defendants, all except first defendant Dr. Merera Gudina, are charged in absentia.

First, second and third defendants are charged for violating various articles of the criminal code and the remaining two defendants, the media outlets ESAT and OMN, are charged with terrorism. Federal prosecutor has also charged Dr. Merera Gudina of violating prohibited acts of the State of Emergency which was declared on 08 October 2016 following the widespread protests in the Oromia and Amhara regions.

According to the charge sheet, defendants are responsible for inciting violence and terrorism which caused for the damage of properties during the protests in Oromia and Amhara regions.

Dr. Merera Gudina appeared before court while the court reads the charge. Federal prosecutor files four separate charges of which two of them are exclusively presented against Dr. Merera and one against Dr. Merera, Dr. Berhanu and Ato. Jawar in common and the remaining terrorism charge belongs to the two media outlets, ESAT and OMN.

Defendants are accused of breaching criminal code articles 32 (1 a & b,) 27 (1), 38 (1) and 238 (1 & 2) which accused the three defendants of being main instigators and leaders of widespread public protests in Oromia and Amhara regions that caused the loss of human lives and property damages in an attempt to ‘disrupt the constitutional order’. They are also charged for disseminating false information using media such as ESAT and OMN.

ESAT and OMN are charged of violating the criminal code articles 32 (1 a & b), 34 (1), 38 and the Anti-Terrorism Proclamation (ATP) article 5(1 b) which deals with giving support to terrorism. According to the charge, the two foreign based media outlets are accused of serving as communication tools for the outlawed political groups Arebegnoch Ginbot 7 (AG7) and Oromo Liberation Front (OLF) in fueling protests.

This charge is presented only against Dr. Merera Gudina which accused him of violating article 12(1) of the current State of Emergency law and its implementing directive which was formulated by the State of Emergency Command Post article 2/1 that makes any contact with individuals that the government of Ethiopia designated as terrorists a crime. Accordingly, the charge indicates that Dr. Merera Gudina’s meeting with Dr. Berhanu Nega during his stay in Europe to testify human rights situations in Ethiopia before his arrest.

In this charge, Dr. Merera is accused of violating criminal code article 486 (b) which deals with giving false and damaging statement about the government to media. According to the charge, the defendant gave a radio interview to VOA that disputed the government’s claim that it had foiled a terror plot during a world cup qualifier match between Ethiopia and Nigeria in Dec 2013 in Addis Ababa.

The court only reads the three charges that are presented against Dr. Merera Gudina. Federal prosecutor told the court that 2nd, 3rd, 4th and 5th defendants reside abroad and requests the court to give order of newspaper call to these defendants who are charged in absentia to appear for the hearing. Besides, prosecutor submitted a notice to the court about the 2nd defendant that reminds of Dr. Berhanu Nega has been sentenced in absentia previously two times in the file names of Teffera Mamo and Andualem Arage.

Dr. Merera Gudina’s lawyer on his part told the court that his client shall not be charged with other defendants in the file. Hence, he requested the court to separate the charge presented against Dr. Merera.

Dr. Merera Gudina has requested bail arguing that the charge presented against him is bailable and is punishable with simple imprisonment. The defendant also supported his request saying that he has good history of political engagement and his coming back to home from Belgium knowing that he could be jailed shows that the defendant has no intention to leave the country if released on bail. He also mentioned health issue and presented other supporting arguments in written for his bail request.

His lawyer also requests the court to give order for his client to remain in Maekelawi prison where he is now or to be changed to a house arrest or to transfer him to elders’ room of Kality prison considering Dr. Merera’s health condition if bail request rejected.
The court gave the following orders:-

Prosecutor to present his reply on defendant’s bail request on 09 March 2017. And the defendant to bring his preliminary objection.

Court adjourned the next hearing to 09 March 2017.