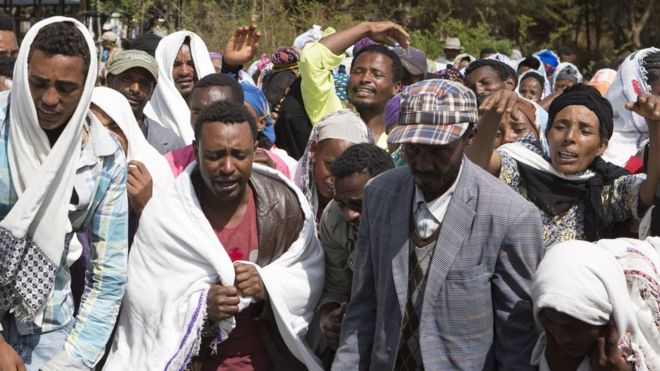 Prosecutor presented two witnesses against the 7th defendant Chimssa Abdissa- under the Gurmessa Ayano charge file. The witnesses told the court that they were at the federal criminal investigation center by the time the defendant was giving his confession.

Tesfaye Goshimie was the first to testify. The witness, who told the court that he is a civil servant, described the physical appearance of the detainee but was unable to identifyhim among the detainees in the court room.

The witness said that he, together with his friendnamed Habtamu Haile, observed when the detainee had willingly given confession at Maekelawi office number 27 on the 19th of Jan 2016. He further said that he saw the witness willingly signed on a 7 pages of document.

He claimed that he remembers that in the document the interrogator read to the detainee, it was stated that the detainee was involved in protest provoking activities in Jimma University and other universities and the detainee signed on it without hesitation.

Answering the question regarding who asked them to go and observe, the detainee said that it was Tesfaye Kebede, administrator of the Arada sub-city who told them to go and observe. According to the witness three more staff members were also asked to observe by the administrator but did not go. Regarding details of the observation, the witness said that it was 11 am in the morning and took 30 minutes. He said that he and his friend sat side by side in front of the interrogator whereas the detainee was a bit far.

The other witness HabtamuHaile who told the court that he is a civil servant was asked to identify at the defendant that he witnesses against. He was not able to identify him.Asked by the court about how he was not able to know whom he is testifying on, the witness claimed that the defendant’s physical appearance has changed. He claimed that the detainee was thin when he saw him.

He told the court that the detainee admitted the statement of the police about inciting students to protest against the government at universities using two different names. Thepolice showed them paper nothing written on it and the detainee was treated in a democratic way.  Responding to the cross examining question forwarded from lawyer of the 7th defendant Tolla Mariam regarding who asked him to observe, the witness said that it wasthe woreda police. The witness also said that he and the other observer who went with him sat side by side with the interrogator, whereas the detainee sat in front of the three. He said that the detainee did sign the document after the interrogator read the statement for him. According to this witness the time was 11 am in the morning and took an hour.

At the end of the hearing of witnesses, Bekele Gerba claimed that a police staff left the court room during the time the first witness was being heard and it was possible to assume that the police left to help the second witness to rehearse what he should say. Bekele condemned the practice and asked the court to correct it. The judges did also agree that the practice is wrong noting that anyone who saw when the police left should have informed them. {The police was actually seen leaving the room during the time the first witness was speaking.]

In the afternoon, witnesses against the 19th and 20thdefendants were heard. ArrarssaWaqtolla was the witness presented by the prosecutor. He told the court that he has an internet service providing firm and knew the detainee as they live in a similar village. He said that the detainee visited his internet café in October 2015and asked him to print a file from a flash disk, butcould not provide him the service due to power cut off. But they exchanged phone numbers and called him the next day as power was on. The detainee came to the café with different individuals in those different days. He asked him to print a single page prepared an invitation card format into 20 copies. He came to knew that the content had to do with politics and inciting. He said he accused the defendant for bringing such material to his shop as he was afraid that would put him in trouble. The detainee told him that it was because he trusted him.

Noting that the witness did mention the name of the individual who came with detainee in the first day and failed to remember the name now, the prosecutor asked how that happens. The witness answered that he did not know the name at all except remembering his physical appearance but had to randomly select among the four names the police mentioned to him as choices. Though the prosecutor requested the court to ask the witness a leading question as the testimonies he gave to police and now vary, the judges rejected the request.

Regarding the questions raised by lawyer of the 19th defendant about where he know the defendant and what the contents of the printed material was, the witness said that the two knew each other since 2014 whereas the content was about a call for demonstration consisting of slogans like ‘let’s stand by the side of our people’ inAfaan Oromo language. The court asked the witness about the name of the individual he said he randomly selected among the four names the police mentioned to him. The witness told the court that he does not remember what the name was.

The next witness was inspector TadesseAmey from Gindeberetworeda of west Shewa zone. The witness mentioned that the protest that took place in the area resulted in damages on market places and government offices as well as deaths of citizens. He explained that the immediate cause for the protest was the Master Plan together with the transfer of Chilmo forest in Gincha to a private investor.  He told the court that slogans like ‘TPLF cannot rule us’. ‘We want to be administered by OLF’, ‘the land of Oromia is not for sale’ etc were loudlyheard during the protest.

The next hearing is adjourned to Jan 05, 2017 to hear remaining prosecutor witnesses.