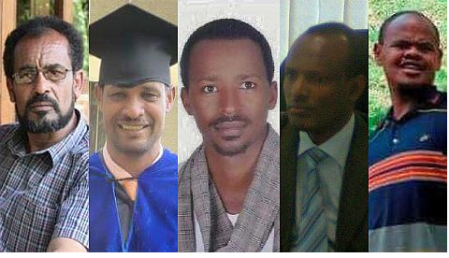 Though the judges at the 4th criminal bench of the federal high court was to go through the audiovisual evidences translated by EBC and rule on the file, they did not do so on 15th May 2017 hearing claiming that it takes more time. They added that the evidences against the 11th defendant were not presented. Hence, they gave adjournment to June 07/2017.

Reminding that it had been more than four months since the evidences of the prosecutor were heard, the first defendant Gurmessa Ayano complained that there was no need for three weeks to go through the files unless it has a hidden motive in delaying the justice procedure.

Judges at the 4th criminal bench gave another adjournment despite the fact that they claimed they would give a final ruling on the June 07/2017 hearing. They again claimed they need more time to make their final decision.

3rd defendant Addisu Bulala lauded his complaint against the adjournments. “We understand the busy schedule you are in. you have to attend meetings. It was a holiday. But we are tired of coming and going for no reason. Our family members and others who attend here are scarifying their time here. We do not mind if you take the time and finish you work. But we are tired of coming with no reason.”

Judges admitted that the complaint sounds proper. The 2nd defendant, Dejene Tafa, on his part added his own complaint. “We believe this bench is relatively good. But we believe there is a hidden hand of the security office behind your moves. We believe that you are serving the corrupted system knowingly.  We are jailed with no crime in our own country, something which is challenging our love for our country. We are then kindly asking you to be strong enough to say no to a corrupted system and save the Oromo people. Let us face the hidden hand. That is it.” he said.

4th defendant Bekele Gerba on his part requested the court though his lawyer Abduljbar that the translated version of the speech he made at the Oromo Studies Association (OSA) is different from the original text in English so that the original text should be cross checked with the Amharic version during the final decision. The court noted the reminder and  The next hearing is adjourned to June 16/2017.