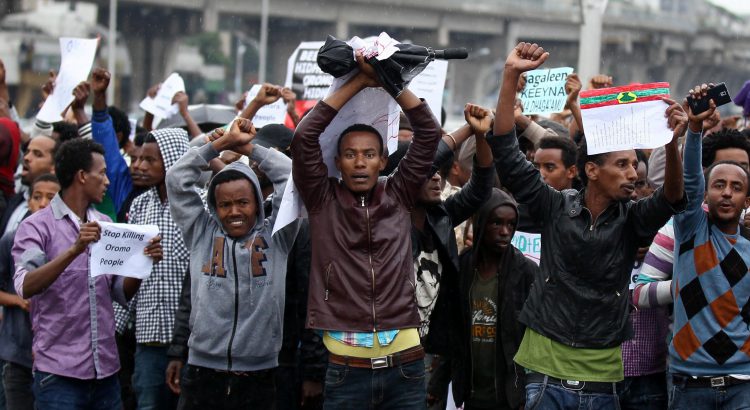 The prosecutor announced that it presents six witnesses whereas the judges asked the police who brought them to appear in court and why he failed to bring the witnesses until the day. Inspector TewodrosAdane apologized for the inconvenience and explained that the inconvenienceoccurred due to unorganized procedures of concerned bodies. He told the judges that he brought six of the witnesses and would bring evidence from woreda administration regarding others who changed addresses in the next hearing.The witnesses were not heard due to time shortage in the morninghearing.  In the afternoon the witnesses did not appear on time so that the judges had to go back to their office and retuned later.

Inspector Abate Feleke who told the court that he is a federal police commander in Jeldu town of EilluGellanworeda was the first witness to be heard today. The witness who testified against the 21st defendant AbdissaKumssa told the court that he saw the detainee in the morning around 9am on the 19th of Dec 2015. The witness failed to identify who exactly the detainee was. He claimed that he saw the detainee for only 40 minutes a year ago so that his physical appearance has faded from his memory.

DeribaWaqie was the next witness presented by the prosecutor so as to explain the damage occurred during the 11-14 Dec 2015 protest.   The witness who said he is a security head of the woreda told the court that he was going to testify against Gadissakumssa, ButoSorie, and Abdi Tolossa who are all residents of Gindeberetworeda. However, none of the lists are under the current charge file that consisted of 22 detainees. The witness said that the individuals he mentioned are members of the Oromo Federalist Congress Party. Mentioning that about 6000 residents participated in the protest, his source of information about the involvement of the three individuals mentioned above was information from the public.  The witness was asked if he says anything about the detainees who were there those under the charge files of Gurmessa Ayano et al. He said that the only thing he knows is that he heard rumors about Gurmessa’s hidden involvement in coordinating the protest.

The other two witnesses who were to witness against the 7th detainee ChimssaAbdissa didn’t testify as the detainee asked the court to defer it claiming that his lawyer did not appeared on the day’s hearing. The rest two are left as the prosecutor said the issue they were to witness about was already covered by the first two witnesses.