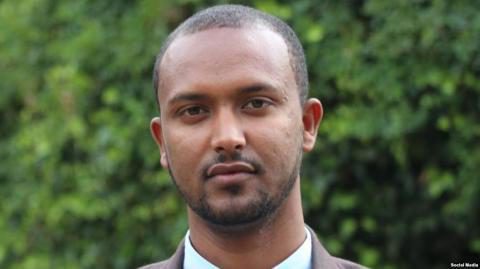 His families appeared to court as defense witnesses

His father Priest Tesfaye Regassa and his sister Gedamnesh Tesfaye appeared to court as defense witnesses in Yonatan’s terrorism charge. His father told the court that Yonatan is a decent person at home. He added that his son has never had any connections with any chaos.

The second witness, his, sister, 27, did also say that she is a Facebook friend as well. She told the court that her brother has never had to do with any conflicts before. She claimed that he was her guardian and advisor about all the positive things in life.

The third witness Ephrem, the defendant’s close friend, had the same issue and was no need to hear according to Yonatan’s lawyer.

The report Prime- Minister Haile- Mariam Desalegn presented to the parliament on the first of March 2016 regarding the cause of the political unrest in Oromia and Amhara Regional States were presented as a defense evidence for the terrorism charges against Yonatan Tesfaye.

The hearing on April 05/2017 at the 4th criminal bench of Federal High Court Lideta Divison heard the audio visual evidences brought from Ethiopian Broadcasting Corporation, the House of Peoples Representatives as well as the February 24/2016 edition of the state owned Amharic daily –Addis Zemen newspaper which all stated the PM’s report to the parliament.

Presenting the PM’s report that confessed that the government acknowledged the political unrest had to do with poor governance that his client had no connection with any external forces unlike the accusation made against the defendant; lawyer told the court about the evidence.

The court that had been hearing the defense witnesses including defense statement of defendant Yonatan himself, gave verdict that prosecutor should present his statement concerning the PM’s report that is presented as defense evidence.

The court adjourned the case to May 10/2017 to give verdict.