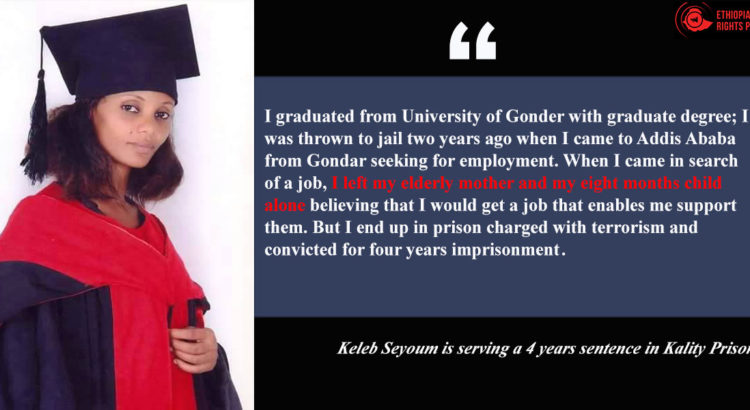 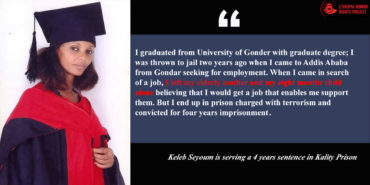 Name: – Keleb Seyoum
Age: – 28 years old
Address: – Amhara Regional State, North Gondar, West Arma’chiho
Current situation: – held in Kality Prison, Addis Ababa
The reason why I am jailed: – They accused me of involving in terrorism act
Prosecutor’s official charge against me:- They accused me of meeting the officials of Ginbot 7, and attempting to go and join the group. I was charged in violating Article 7(1) of the Anti-Terrorism proclamation (ATP).
The following rights violations are committed against me in prison:-
1. I was detained without any court order
2. They was not able to communicate any of family member to even tell them that I was arrested or where I was.
3. I was held incommunicado for months, after my families know my where about
4. I was beaten a lot during interrogation
5. They insulted me based on my sex and treated me on many unspeakable ways
6. They forced me to give confession without my consent
7. After I was moved to Kality prison my visitation is still restricted. No one can visit me unless their name is on pre-registered list
8. My visitation hour is only 30 minutes a day on lunch time.
I was thrown to jail two years ago when I came to Addis Ababa from Gondar seeking for employment. When I came in search of a job, I left my elderly mother and my eight months child alone believing that I would get a job that enables me support them. But I end up in prison convicted for four years imprisonment.
I have graduated from University of Gonder with graduate degree and I used to work for the women’s affairs office in Armachiho, Gondar. I was fired because I refused to take part in any political activity by the ruling party. I was a member of the Unity for justice and Democracy Party.