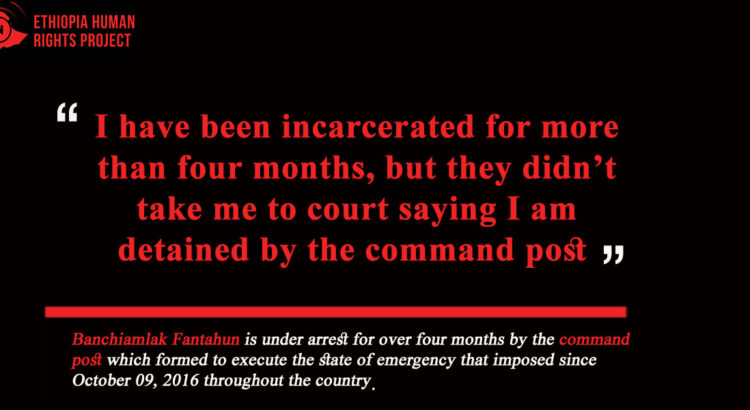 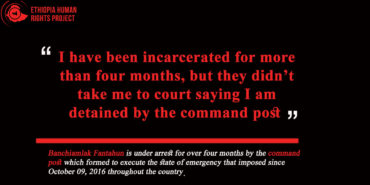 Name: Banchamlak Fantahun
Age: 22
Address: Oromia region Addis Ababa surrounding Special Zone, Sululta Town, Kebele 02
Current situation: Held in Sululta Town Police Station
The reason why I am jailed: inciting protests in Oromia region, Sululta twon.
Prosecutor’s official charge against me: There has not yet any official charge brought against me but during interrogation I learnt that I was accused of writing and spreading provoking materials. They said I was preparing and printing fliers to incite violence in Sululta town.
The following rights violations are being committed against me in prison:-
1. Though I have been in prison for over four months, they haven’t yet presented me to court claiming that I was detained under the “command post”.
2. I was denied access to legal advice.
3. I experienced insults that hurt my dignity, I was mistreated and discriminated based on my sex.
4. I was repeatedly threatened and warned for asking questions.
5. I was denied my right to be visited by families and friends.
6. I am being detained in a very small crowded room with no access to sun light and fresh air.
I did commit no crime. I am just a young woman who earns a living by providing typing and photocopying services to get income and support my family.