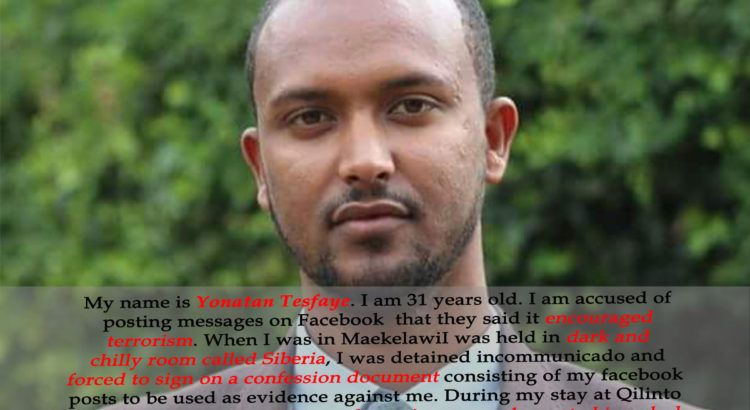 Name: – Yonatan Tesfaye Regassa
Age: – 31 years old
Address: – Addis Ababa
Current situation: – Jailed in Zeway federal prison (they sentenced me for six years and six months)
The reason why I am jailed: – accused of posting messages on my face book account that they said it provokes terrorism.
Prosecutor’s official charge against me:- at the beginning, I was charged for allegedly violating article 4 of the Anti- Terrorism Proclamation (ATP). But later during ruling, they changed my charge from violating article 4 to a charge against violating article 6 of the same proclamation, which ended with a sentence of six years and half.
The following rights violations are committed against me in prison:-
I. During the first 4 months while I was in detention at Maekelawi
. I was held in a dark and chilly room called Siberia
. I was detained incommunicado. ( I was not being visited my families, friends and relatives)
. I was forced to sign on a confession document consenting of my posts to be used as evidences against me

II. During my stay at Kilinto Prison
. I was separated from other prisoners and arrested in dark room alone
. I spent three days with my arms and legs tied (chained)
. I was beaten up many times
. They threatened to kill me many times
. My visitation time was very limited for few minutes
. Was banned from talking to my lawyer
I was born and attended my education from elementary to university here in Addis Ababa. I am the first child for my parents. I went to Addis Ababa University and graduated on Foreign Languages and Literature, I used to teach English at different high schools.
I was politically active citizen, since election 2005; I have been participating in peaceful political movements. I joined Blue Party in 2013 and served as a member and later as the party’s spokesperson.
I was among the candidates bidding for a seat in the House of People’s Representatives during the recent 2015 general election. I believe in peaceful struggle and walking according to legal procedures. In fact, I did commit no crime. I simply practiced my right to freedom of expression; which is a constitutional right.