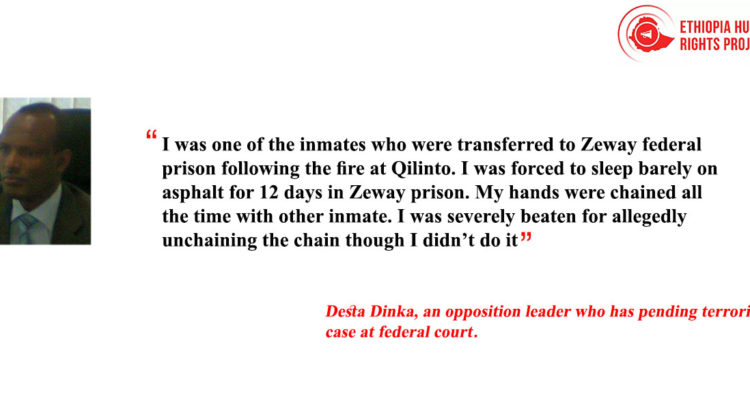 Name: – Desta Dinka Gossie
Age: – 42 years old
Address: – Oromia Regional State, Sululta town Woserbe Kebele
Current situation: – jailed at Qilinto prison
The reason why I am jailed: – I believe the reason for my arrest is that for participating in a legal and peaceful political group here at home and speaking up for the public interest.
Prosecutor’s official charge against me:- The federal prosecutor officially charged me and three others with terrorism. As the charge stated, prosecutor charged me of violating Articles 4 and 3(1)/(2)/(4)/(6) of the broadly interpreted Antiterrorism proclamation (ATP). Prosecutor specifically accused me of organizing youths for protests in Gindeberet and Jeldu of North Showa, Oromia region. I am now attending court hearings at the 19th criminal bench of the federal high court Lideta branch.
The following rights violations are committed against me in prison:-
1. I was denied of visitors in the first weeks of my stay at Maekelawi federal investigation bureau.
2. I was forced to stay at police investigation center for more than five months in violation of the law.
3. I was held in a condition where I cannot get sunlight and fresh air in Maekelawi for many weeks.
4. I was one of the inmates who were transferred to Zeway federal prison following the fire at Qilinto. I was forced to sleep barely on asphalt for 12 days in Zeway prison.
5. My hands were chained all the time with other inmate.
6. I was severely beaten for allegedly unchaining the chain though I didn’t do it.
7. I spent days without getting my visitors (families) for they were not allowed to come in.

I am married and have children. I have been living with my families in Sululta Woserbi kebele, Finifine special zone of Oromia region. I have been a leadership member of the legally registered opposition parties of Oromo Federalist Congress (OFC) and a coalition of opposition groups (parties) called Medrek in which OFC is one of the member parties.
I am a lawyer by profession. I have been providing legal aid to the students who were/are arrested for staging peaceful protest in 2015 in opposition of the so called “Master Plan”. I believe I am in jail since Dec 15/2015 for doing my legal and peaceful work.