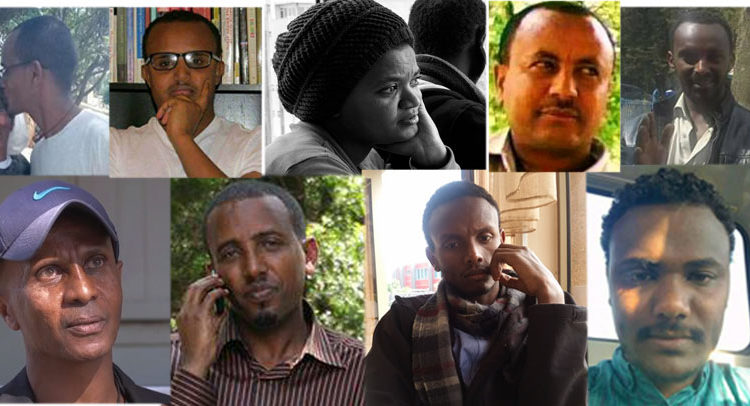 On Sunday, March 25, 2018, police arrested 11 activists’, politicians, journalists and bloggers including recently released former opposition leader Andualem Arage and Eskinder Nega from a welcoming party. According to eyewitnesses who participate in the celebration, police came and remove the nation’s old flag that has been displayed at the private gathering. The detainees are three bloggers, Mahlet Fantahun, Befeqadu Hailu and Zelalem Workagegnew, journalist Temesgen Desalegne and Eskindir Nega, former opposition leader Andualem Arage and activists Wouynishet Molla, Addisu Getaneh, Yidnekachew Addis, Sintayew Chekol and Tefera Tesfaye. The commander of the police station, around Gotera, told detainees that they are arrested for conducting a gathering which has been banned by the current state of emergency and placing an unofficial flag on the private event.

In another crackdown in Bahirdar city, the capital of Amhara regional government, security forces detain around 19 individuals who had been preparing to establish a regional political party and two journalists, including an editor of Amhara regional state TV journalist Nigatu Asires. An individual who wanted to be anonymous tells VOA Amharic that National Electoral Board of Ethiopia (NEB) knew about the start of the legal registration of the party and permitted them to proceed with fulfilling other requirements. The individuals are:

Even though the government promised to open political space and release political prisoners, the recent developments of the declaration of a state of emergency (SOE), the rearrests of released political prisoners and restriction on rights to association clearly shows more backslide in Ethiopia.