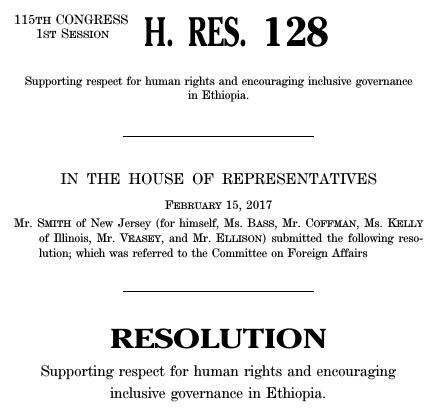 The Honorable Paul Ryan
Speaker of the House
H-232 The Capitol Washington, D.C. 20515

We are writing to underscore the importance of House Resolution (H.Res.) 128 and the need to bring it to a vote as soon as possible. The resolution, which calls for respect for human rights and encourages inclusive governance in Ethiopia, has strong bipartisan support with 71 co-sponsors. It passed the Foreign Affairs Committee unanimously on July 27, 2017, and was scheduled for a vote on October 2nd. However, on Thursday, September 28, the measure was removed from the calendar without explanation.

Last week, a Member of Congress publicly stated that H.Res.128 had been pulled due to threats by the Ethiopian government that if the House proceeded with a vote, Ethiopia would withdraw as a partner on regional counterterrorism efforts.

Ethiopia has long been an important security ally of the United States and continues to receive financial, intelligence and military assistance. However, its worsening human rights record, which includes a brutal crackdown on dissent since 2015 and near elimination of democratic space in the country, has introduced profound instability in the region. The US has long seen a stable and prosperous Ethiopia as crucial to the effectiveness of its counterterrorism efforts.

We believe H.Res.128 represents an important and long overdue response to Ethiopia’s heavy-handed tactics against largely peaceful protests that began in Oromia in 2015 and later spread to the Amhara region in 2016. Together these regions represent around 70 percent of the population of Ethiopia. They indicate a widespread grassroots desire for reform in the country.

A strong, unambiguous signal from the US demanding concrete reforms is required to avert crisis and to create a path toward sustainable regional stability. The passage of H.Res.128 represents an important first step in that direction and should not be derailed by last-minute bullying tactics. This would not be the first time the government of Ethiopia has made threats of this nature and it is worth noting they have never been carried through.

The resolution raises a number of important recommendations that could benefit both Ethiopia and the United States in their counterterrorism partnership while encouraging the government of Ethiopia to take steps to open up civic space, ensure accountability for human rights abuses, and promote inclusive governance.

We believe the resolution should be placed back on the House agenda and voted on as soon as possible in order to show support for the people of Ethiopia in their desire to have a stable, prosperous and democratic country.