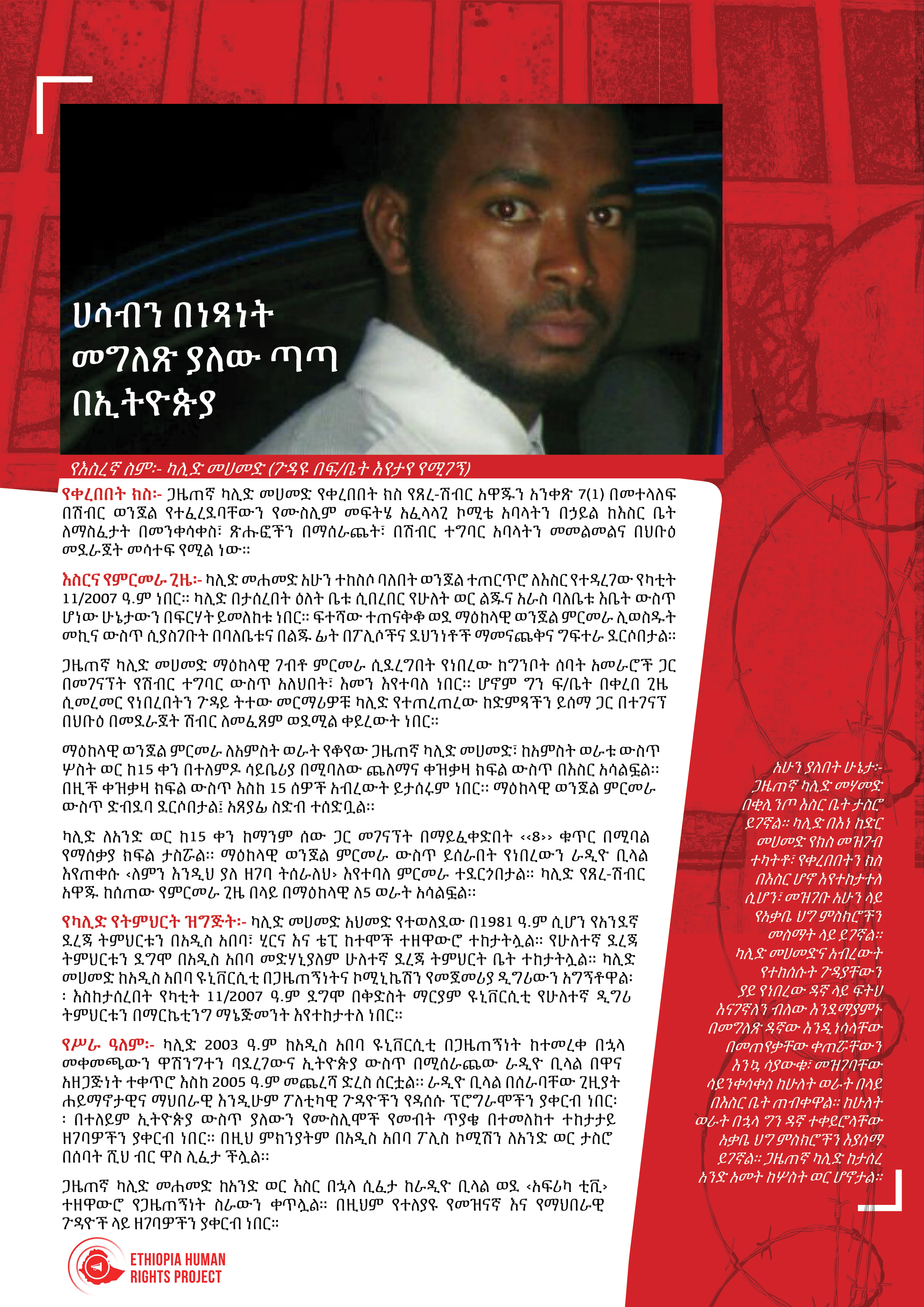 Name of the Detainee: Khalid Mohammed (On Trial)

Charges – Journalist  kahlid Mohammed is accused of violating Article 7(1) of Anti-Terrorism Proclamation 652/2009 by organizing a escape plan for the jailed Ethio-Musilim Resolution Committee, distributing piece of writings, recruiting and organizing members in clandestine for an act of terror

Arrest and Interrogation- He was arrested on 11th of Feb, 2015 on suspect which is similar to his current charge. On the day of his arrest and his house was raided his new born baby and his wife in a childbed and have been looking the detention with fear. The police and security men have been mistreating and insulting him in front of his family.

While he was interrogated at Maekelawi the interrogators has been pressing him to confess about his contact with Ginbot Seven (outlawed political party) Leaders. Surprisingly, when the police filed his case by dropping the previous allegation, they altered the charge to a ‘clandestine Terror group’ called Dimstachin Yisema.

He has been in Maekelawi detention center for five months out of which for three months and fifteen days he was in Siberia (Dark and cold part of Maekelawi). More than 15 suspects have been in a small cell. He was tortured and abused both physically and verbally.

Kahlid had also been in solitary confinement called “Number 8” for one month and fifteen days’. His broadcasted programs on Bilal Radio were the center of his interrogation.  Khalid has been in Maekelawi for five months. Police violated the total time to remand the suspect for investigation explicitly written in the proclamation   that shall not to exceed a period of four months.

Education- Khalid Mohammed Ahmed was born in Addis in 1989. He has completed his elementary education in Addis Ababa, Hirana and Tepi towns. He has graduated from Medahanealem High school in Addis Ababa. He has got his first degree from Addis Ababa University in journalism and communication. By the time he was arrested he was graduate school student in  Marketing Management at St. Mary University.

Career- After graduating from Addis Ababa University in Journalism, Khalid has been working for Bilal Radio which is based in Washington Dc and broadcasted all over Ethiopia form 2011-2013. He has been covering religious, political and social issues in his programs. Specifically, He was broadcasting frequently on Ethiopian Muslims questions on Freedom of Religion and Belief. Before his current arrest he has been under custody in Addis ababa Police commission for one month and released on 7000 Ethiopian birr bail. After his release he has started to work for AfricaTV as a journalist. His programs were focused on social issues and entertainment.

Current Situation- Currently Khalid Mohammed is in Addis Ababa Remand Center (kilinto). He is under Kedir Mohammed et al file. While the Higher court was hearing the witnesses of the prosecutor the defendants has complained to the higher court Administration that they didn’t believe on the impartiality of the judge and asked a new bench should see their case. Their case was extremely delayed for months until the appointment of a new judge.  The court recently resumed hearing the witnesses of the prosecutor with a new judge.  One year and three months has passed since Khalid was arrested. 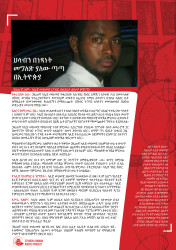