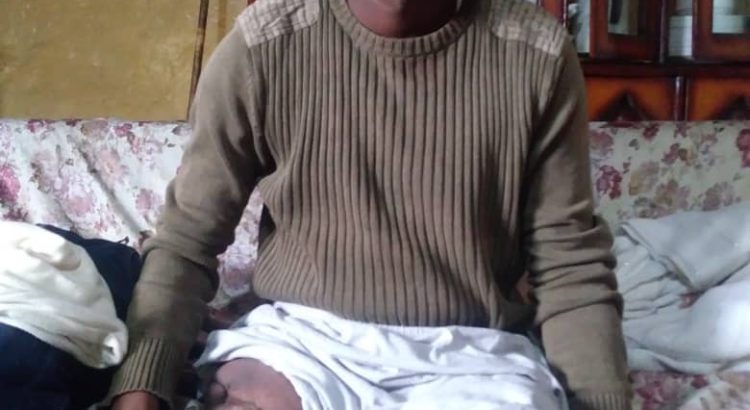 Kefyalew Teferra Deresse is a 33 years old man who was born in Horro Guduru. He now lives in the outskirt of Addis, Sebeta, Oromia region. He was jailed for 12 years since 2006. In prison, he has lost both of his legs and suffered torture. Here is his story.

In a fateful day in September 2006, Kefyalew was with his friends heading to Addis Ababa, capital of Ethiopia. “On the road, police started to shoot at them”, says Kefyalew and he was detained. He was suspected of being member to the then outlawed group OLF (Oromo Liberation Front). On that day, three people were killed and he was wounded around at his kneel and another leg’s thigh. He was directly taken to Police Hospital and both his legs were amputated. Kefyalew says his legs were cut off without his consent and knowledge in anesthesia.

Kefyalew was moved to the infamous Maekelawi (Federal Police Investigation Center) before his wound was cured. He remembers his body and cloth was soaked through blood at that time. He said, “the first person who interrogated me was Girma Kassa (Commissioner). After asking me a few questions, he told his comrades to ‘help me take shower’. I understood he meant ‘beat him’ after they tortured me immediately after he left. Subordinates of Girma had made me suffer. They had hang my handcuffed arms up and they pressed the wounds on my legs and said to me, ‘let OLF come and save you’. They used to slap both of my ears at the same time. They had tied me with the chair and flogged me, punched me.”

“The Interrogators used to come drunk at nights and beat me,” said Kefyalew. “The beating had continued for seven months. I was detained alone in a dark cell. Since I was not able to walk by myself, they usually come to my room and torture me. Sometimes at nights, they used to take me to places I don’t know and threatened me to death. They used take me to top of cliffs and they threatened me saying that they will throw me down.”

Kefyalew remembers that he used to collapse repeatedly during torture. He said he knew people who died due to torture. His interrogators used to give him some relief when he fainted in fear that he might die too. However, he said, “they didn’t allow me access to health service even though I needed it.”

Kefyalew was taken to court 7 months after he was detained. He was not allowed to have lawyer’s nor family’s visit. He says he changed clothes after months, “My clothes were soaked with blood. I looked pale because I had no access to sunlight. They don’t take me to toilet when I need to, so I used to urinate in my cell. Even when they take me to, they just throw me in to it. I had never been bathed in 8 months back then. In addition to the torture, I had endured their daily insult, intimidation and threats.”

– Lack of due Process of Law

Kefyalew had been first transferred to Kality Federal Prison from Maekelawi. That was when he first met his family members. In Kality too, he was sent to dark room for 2 years and 6 months without a formal excuse. At first, he was allowed family members visit but later he was denied this too without an explanation. He says he had filed compliant to court for no response. Even security officials had threatened his lawyer for filing compliant to court on behalf of Kefaylew. “While I was detained in the dark room [of Kality prison], I was also denied access to health service. I was disabled and no one was there to help take me to toilet. I was forced to urinate in my detention room. In such a condition, they had me sentenced for life without due process of law” remembers Kefyalew.

Kefyalew was then transferred to Qilinto Federal Prison from Kality. In Qilinto, he remembers he could not find enough food. “My body was injured, so it was challenging every prison I was moved to” says Kefyalew. “I was not allowed to have health service in Qilinto too. I had restriction to family visit.”

Kefyalew says, “people’s struggle freed me”. He adds, “I was able-bodied when I was jailed; I have lost both of my legs in atrocity. Now, I’m assisted by artificial legs. But, the material of the artificial legs has limitations. It doesn’t give me comfort. It pains me. One of my ears bleeds. I need treatment. I have a head ache. I am too hurt.” Kefyalew found life after prison very tough.

Kefyalew received no compensation for atrocities that has been done against him by government officials. “My people freed me. They support me psychologically too. But, the government has done nothing to help me,” he said. “The people who have done all this to me are still in power. There is no accountability against the perpetrators.”

Kefyalew was a third year student in Hawassa University when he was arrested. His life is now changed for good. He remembers the whole issue affected his family: “my father, as shocked as he was when he saw my legs were amputated, he died before I was released. They have also jailed and tortured my brother. They have threatened my sister repeatedly because she used to come, visit me in prison. I have received no compensation for what happened. Neither was anyone held accountable.”