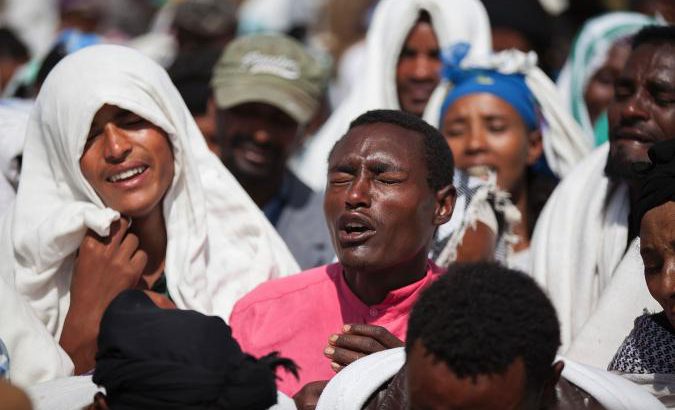 It was to hear the five witnesses the prosecutor claimed remain that the court adjourned the hearing to Jan 23/2017.  Three of them testified in today’s hearing; two of them were against the 18thdefendent, one of them against the 5th defendant.

The witness told the court that he was asked by police to be while he with a friend at a cafeteria around Maekelawi. He said that the police asked them to observe while they take evidences against the detainee. He further claimed that he remembers that the detainee did sign on a 7 pages paper that states he was a student of Addis Ababa University and joined the Oromo Liberation Front(OLF) following the measures the government took in connection with the Master Plan and captured in Moyale while he attempts to leave the country. The witness added that he and his friend did sign a different paper after that.

Regarding the second witness (MesfinBirhane), the prosecutor asked the court not to hear the witness given his testimony would be similar with the previous one. The court accepted the request.

The next was EndaleBerhe who witnessed against the 5thdefendant (AbdetaNegassa). He said he observed when the personal computer of the defendant was checked and materials printed on at Maekelawi detention center.

He told the court that he cannot identify the detainee given that he saw him for not more than 20 minutes a year ago. He said that he went to the Federal CrimeInvestigation Office( Maekelawi) with a friend named Fikralem as his friend has a business there on that particular day and the police asked them to be observers. He said he saw when the detainee opened his laptop as per the request of the police in the interrogation room. He added he saw 4pages; three in AfaanOromo and one Amharic paper printed.  He also said provoking songs in which people wearing the flag of the OLF were found on his laptop.

Noting that he didn’t know what the contents of the three pages written in Afaan Oromo were about, he said the one page written in Amharic consisted of slogans like’ stop land grabbing’, ‘the government is responsible for the dead’, and ‘EPRDF is a terrorist’. The witness identified the paper he saw being printed among other files given to him. He told the court that he does not speak Afaan Oromo but was able to identify the video was a music clip. He further said that the detainee was in a relaxed mood while the police took them to observe. He added observers were served tea at the time.

The prosecutor asked for more time following the completion of the hearings of thesewitnesses. He claimed that the rest witnesses changed their addresses and he came to know their addresses but was unable to present them due to time constraints.

Lawyerslauded their objection against the request of the prosecutor. They claimed that the request violates article 37 of the constitution that states the right to get justice as well as that of article 94 of the procedural law that deals with witnesses presentation procedures.

The vice president of OFC Bekele Gerba who is the 4th defendant spoke, “We believe the points the prosecutor raises are untrustworthy. When the prosecutor asked the court to present witnesses in a closed hearing, the reason it did give was that the witnesses participated in the crimes detainees allegedly committed. But no witness except one said that they participated. Even the one who said so, he said he saw the alleged crime from distance. The contention that the prosecutor had no time is not reasonable. Hence, we ask the court to consider that the witnesses do not exist.”

The prosecutor on the other hand contended that the new addresses of the witnesses are already known and efforts are being made to bring them to appear to court so that another adjournment is appropriate.

Regarding the rest witnesses, Inspector TewodrosAdane from the Federal PoliceCommission claimed that the office has got information about the whereabouts of the two witnesses; one went to Kenya while the other is in Gimbi. He claimed that attempt is being made to reach them and bring them to court.

Hence they asked for more time.  Judges gave verdict that the prosecutor is given one last chance to bring witness testimonials. Thus the next hearing is adjourned toFeb 10/ 2017.