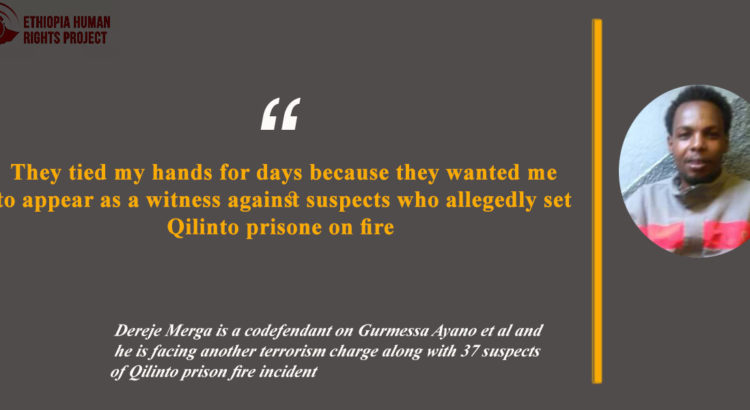 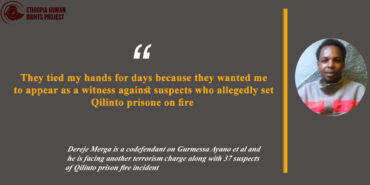 Name: Dereje Merga Debelo
Age: 29
Address: Addis Ababa, Yeka Sub City,Woreda 02
Current situation: Qilinto Prison
The reason why I am jailed: They say I was suspected of terrorism
Prosecutor’s official charge against me: The first charge is under the charge files of Gurmessa Ayano, which has to do with being a member of a terrorist organization recruiting new members and meeting the officials/leaders of OLF. The second charge has to do with getting involved in the planning and destruction of the Qilinto prison with fire accident. Both charges are under Ethiopia anti-terrorism law.
The following rights violations are committed against me in prison:-
A. When I was at Maekelawi Interrogation Bureau
1. I was interrogated at night.
2. I experienced heavy physical injury during the interrogations.
3. I was detained in dark room and was not able to communicate with anyone.
4. I was threatened and insulted.
5.I was forced to confess the things I didn’t do.

B. At Qilinto and Shewarobit prisons
1. Experienced heavy physical damage as a result of the torture
2.They tied my hands for days because they wanted me to appear as a witness against suspects, who allegedly set Qilinto prisone on fire.
3. They banned me from receiving meal from my family
4. prison guards used to beat me when I use Afaan Oromo language because they wanted me to speak the language that I am not familiar with
5. The room I was jailed was always closed with no access to fresh air and natural light.
6. For a long time my hands were tied with another prisoner

Background
Before my detention, I was a teacher and a member of Oromo Federalist congress (OFC), which is a legal political party acknowledged by the Electoral Board. I was particularly involved in the youth wing of OFC.