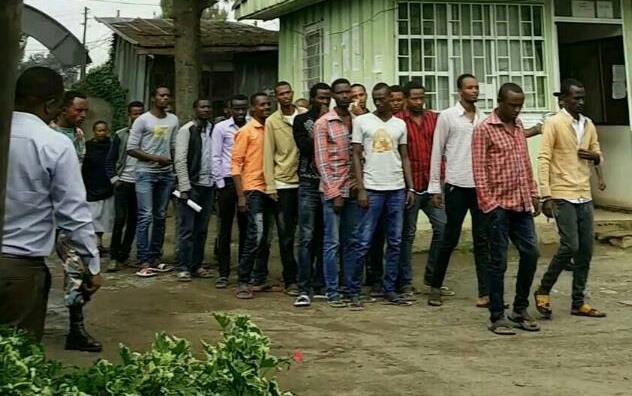 “They were about to break in to the US Embassy” -witnesses

On May 17th, the 20 Addis Ababa University Oromo students, who were arrested and charged for demonstrating at the US Embassy gate on March 8, 2016 opposing the ongoing human rights abuses and killings on citizines following the public protest in Oromia, appeared at the Menagesha court where their trial is being held. The case was adjourned for May 17th to proceed with the hearing of the remaining 5 of the 7 prosecutor’s witnesses. The 2 prosecutor’s witnesses had testified previously.

When asked about from which direction the demonstrators came towards/approached the gate of the US Embassy, contradictory explanations were made by the prosecutor’s witnesses.

“They gathered at the Embassy gate coming from different directions” ;

“They all came to the Embassy gate together” ; and

When asked why they arrested the students if they conducted according to given orders from authorities, the witnesses explained that “we were told that additional force will be provided and were ordered to arrest them”.

The prosecuter’s witness also told the court that they had witnessed that the students were shouting and holding slogans in English, Afaan Oromo and Amharic. The witnesses told the court the following Amharic slogans they remember.

1. “End the military rule in Oromia!”

3. “Opposition is not terrorism!”

4. “Our opposition is peaceful!”

5. “Schools are places of knowledge; they should not be military camps!”

On May 17th session, the prosecutor’s witnesses hearing was finalized and the case is adjourned for June 6, 2016 for a verdict.

In addition to the families of the few students, diplomats from the US Embassy and the EU for the first time attended the trial. The security agents, who, in the previous trial session, gave warnings to friends of the students to never come again at the trials, were also present. And the friends of the students that showed their support by attending the previous trial did not attend this time.

June 6, the 20 Oromo students of the Addis Ababa University appeared before the Menagesha court. The hearings of the prosecutor’s witness/testimonies were completed on the previous trial sessions,   adjourned for verdict.

But the verdict hearing is adjourned again for another time as the transcription of the recorded witnesses hearing was not finalized. The judge told the court that this is because one of the two employees responsible for transcription is on leave. Though initially the judge adjourned the case for June 27, the defendants lawyer (Ato Wondmu) requested for a shorter appointment and a speedy process of the case claiming that the defendants are students. Based on this, finally, June 22, 2016 is set as the date for the next trial session.