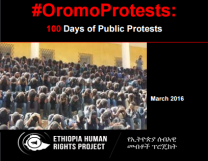 Oromia, the largest regional State in the Ethiopian Federation, has been rocked by series of protests in the past 100 days since mid-November 2015. The protests began with the aim of having the proposed Master Plan of the capital, Addis Ababa, officially referred as the ‘Addis Ababa–Finfinne[1] Integrated Development Plan’ (‘Master Plan’) scrapped. The Master Plan was designed by Addis Ababa City Administration in collaboration with the government of Oromia Regional State and introduced early in 2014. The protestors opposed the Master Plan, which covers 1.1 million hectare of land (approximately twenty fold the current size of Addis Ababa), saying that its implementation will result in the eviction of millions of farmers and families from their land. The first protests against the Master Plan were held mainly by students of Oromia regional State in April/May/June 2014 which resulted in deaths, injuries and imprisonment of many people all over the state. The protests erupted again in November 2015 and continued up until now.

The ‘second round protests’, as it is called by activists, took wider area and longer time than its antecedent. Police brutality have reached its climax and deaths, injuries, mass arrest, kidnapping have tragically been reported in the State. In only the first hundred days of these protests, hundreds of towns and villages have witnessed mass incidents. In addition, death tolls have reportedly reached more than four hundred, thousands of people were injured and tens of thousands people were briefly arrested. Even though the Master Plan has been officially been scrapped by OPDO, ruling party in the regional State, on 13 January, 2016, fifty four days after the second round of the protest erupted, the third round of the protests have continued with a new momentum; what has started as an opposition to the Master Plan seems to end up looking for answers of political questions that have grown in the past two decades.

The Ethiopia Human Rights Project (EHRP) has actively followed the first 100 days of the protests and summarized the issues, causes, and the human rights violations perpetrated by government security forces in response to the protests in Oromia region.