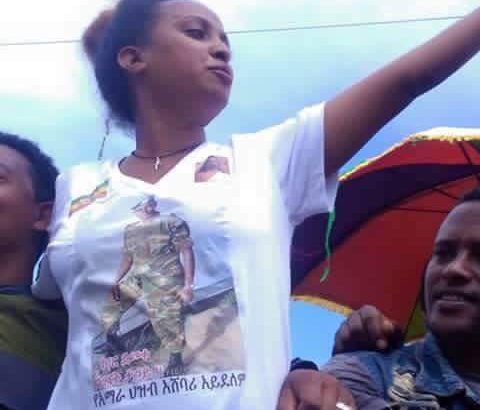 It was to hear the remaining prosecutor’s witnesses that defendants under the file of Nigist Yirga et al. were adjourned to May 23/2017.  The prosecutor failed to present four witnesses expected to appear but presented a letter from the federal police commission stating three of the potential witnesses could not be found in the address they had given whereas one of the witnesses was critically ill and attending medication in a hospital.

Emphasizing the fact that prosecutor failed to present those witnesses repeatedly; lawyers of the defendants on their part requested the federal high court at Lideta 4th criminal bench that ruling should be given considering the already heard witnesses instead of delaying justice in longer adjournments. They further argued that the excuse the prosecutor presented regarding the reportedly sick was hardly credible as the prosecutor did not present any medical evidence that proves it.

Similarly, the 5th defendant did loud his objection against the longer adjournments and the excuses given by the prosecutor.

“It is an injustice to simply wait for those imaginary witnesses. Our families are visiting us travelling 600-700 kms.  I know why I am brought here. It is because of my identity and my political view. Families of two of the defendants under this file do not have any idea about where these defendants are. They are not sure if these victims are alive or dead. In a country where a tyranny finds it so easy to jail thousands of civilians without any letter from a court, an excuse about how hard it  has become to find four witnesses does not give any sense unless it is until the prosecutor finishes training actors rehearsing the fiction it writes and act here before the court. The alleged crime is stated to have happened in Bahir Dar and Gondar. Thus, the witnesses are supposed to be there in the physical setting if it has to sound logical. But the witnesses the prosecutor claimed to present are from Addis Ababa,”

he bitterly objected the claim for more adjournments.

Lawyer Alelegn also complained about Kality prison’s illegal administrative procedures that violated the right of the 1st defendant, Nigist Yirga, to be visited by her family. According to the lawyer, the prison administrators banned the defendant’s sister who came from U.S to visit the defendant giving an excuse that she was not in the lists of visitors. Her other family members that came from Gondar has also suffered a lot to visit Nigist, all retuned without having any access to see her.

The lawyer further claimed that the rights of persons under custody stated under Article 21(2) of the constitution, in which any other laws and regulations against it are invalid, should be respected. He claimed that it would be difficult to get every family member and relatives with the right to visit defendants registered. Though the first defendant, Nigist, raised her hand to loud her say, judges denied her a chance to speak claiming that her opinion had already been presented by her lawyer.

The defendant then sat despite the trend that a defendant is supposed to stand and attend the hearing while judges speak of his/her case. Nigist hesitated to stand up while others do before finally stand and told the court that she had done that as her right to express her complaint was compromised. Reminding that she used to put her hands in her pocket, chew gum and making sound, and sit while her case hearing was being conducted, judges gave oral warning, which they claimed it was the last.

Prosecutor tried to address the concerns of both the defendants and their lawyers. Prosecutor defended that federal police had not reported that it failed to find the witnesses but asked more time. They gave verdict that prosecutor should get those witnesses in the following hearing and come with a medical evidence regarding the fourth witness. Court adjourned next hearing to June 02/2017.

It is to be recalled that the 6th defendant, Yared Girma, had been complaining about the material interrogators at Maekelawi confiscated. Hence, the bench had given verdict that prosecutor should make sure that the properties were returned to the defendant unless they are taken as exhibits. He claimed in the hearing that his properties, including 500 pages of research he conducted on Amharic language, remain confiscated except some CDs.