Charge- Journalist Temesgen was charged and found guilty by violating Article 257 of FDRE’s Criminal Law amended in 2004 by Provocation and Preparation the youths to revolt against the constitution and the constitutional order, blaspheming and falsely accusing the state and inciting the public through false rumors. The prosecutor has presented five of his article written in Fitih Newspaper as evidence.

Childhood and Education- Temesgen Desalegn was born in Addis Ababa city around Arat kilo in 1979. He has completed his elementary school in Estifanos and Andinet Schools. He has graduated from Minilik II High School. In April 2000 while he was learning his Preparatory class in Addis Ababa Building construction collage, he was fired because the school has concluded that he was part of the Protest by Addis Ababa University students against the regime on that year. After that he has joined Commercial collage and has got his diploma in Accounting. Then, he has got his Bachelor of Arts degree from Addis Ababa University in History.

Career- Journalist Temesgen desalegn has been working as an auditor for short time before he joined the media industry. He has started writing articles on Fitih newspaper which was founded by him. After the government has forced Fitih newspaper out of Print by denying license renewal Temesegen has fought to stay publishing and writing. He is the founder of Le’elina Newspaper, Addis Times and Fact Magazines, even though; all of them went out of print by following the path of Fitih Newspaper. He has been working both as a managing editor and writer in all the publishing. He has published a book entitled ‘YeMeles Amliko’ by collecting his articles published in newspapers and magazines.

Current Situation- Previously, Temesgen Desalegn has been following his charge out of jail because he was released on bail. On the 13th of Oct, 2014 the 16th bench at the federal high Court has found him guilty and sentenced him for three years.

He is jailed in a Federal Prison which is located in Ziway town 160 kilometers away from Addis. He has been mistreated by prison Administrators and warders throughout his stay there. He is in high security zone and he is not allowed to access books. He is also denied access to socialize and communicate other inmates and prohibited from being visited by his family and friends. Temesegen has a hearing problem on his left ear but he is not permitted to get any medical treatment. 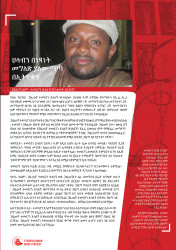