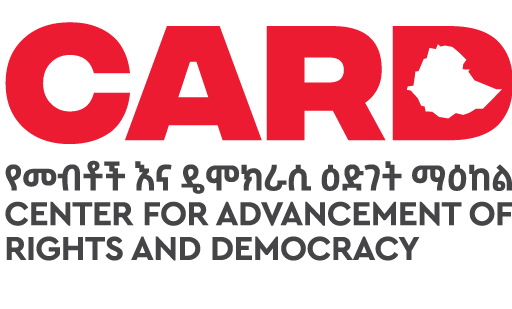 The Center for the Advancement of Rights and Democracy (CARD) is a board-led, for-not-profit organization registered in Ethiopia under the Civil Societies Law 1113/2019 with registry number 4307. CARD acquired its legal personality on 24 July 2019.

​CARD aspires to see Ethiopia where democratic culture flourished on human rights values and has been working with a mission to empower citizens and groups of citizens to ensure their ability to promote and defend human rights and build democratic governance in Ethiopia. CARD is an organization that follows a rights-centered approach to help the democratization process in Ethiopia. Currently, CARD implements several projects under five major thematic program areas: Civic Engagement, Media Literacy, Women and Youth Empowerment, Digital rights, and Democratic Index.

To empower citizens and groups of citizens to ensure their ability to promote and defend human rights and build democratic governance in Ethiopia. [More on CARD’s Website]

Background of the Project

Through the support of the United States Agency for International Development (USAID), CARD is implementing a project under the title “Under the Ethiopian Sky: Articulating Contentious Issues for a Meaningful Dialogue”. It focuses on promoting peaceful and amicable ways of resolving issues in a democratic way amongst different groups of youth.

CARD is currently implementing a portion of the 10-month project that entails the production of 7 documentaries based on 7 selected contemporary contentious issues in Ethiopia. he selected issues are as follows:

To this end, CARD wants to hire seven (7) production companies to develop 7 documentaries on the selected controversial issues and invite all qualified candidates to apply according to the below-specified requirements.

Scope of the Task

The documentaries seek to highlight controversial issues in a way that helps the viewers get a comprehensive highlight of the issue and how it came about to be controversial. They seek to touch on history, context, the issue, and its solutions within the allocated time. It will contain three major components: the questions, the dilemma, and democratic alternatives to the solution. To help guide this, literature reviews and storylines will be prepared for each controversial issue.

Each documentary must consider the following as the scope:

The outcomes are listed as follows:

CARD will facilitate a screening event for the 20-minutes long documentary and the awarded production company shall film the reflections of the youth to the documentary which articulated the questions, the dilemma, and democratic alternatives to the solution at the watching events. This will be a 10-minute long compilation of reactions that will be then added to the 20-minute documentary

The production company(ies) will be responsible for the following:

assignment. The required background and experience for the consultant/consultancy team is as follows:

Interested and qualified applicants should send the following documents to email: apply@cardeth.org no later than Dec 20, 2022, with the subject line Application for documentary production.