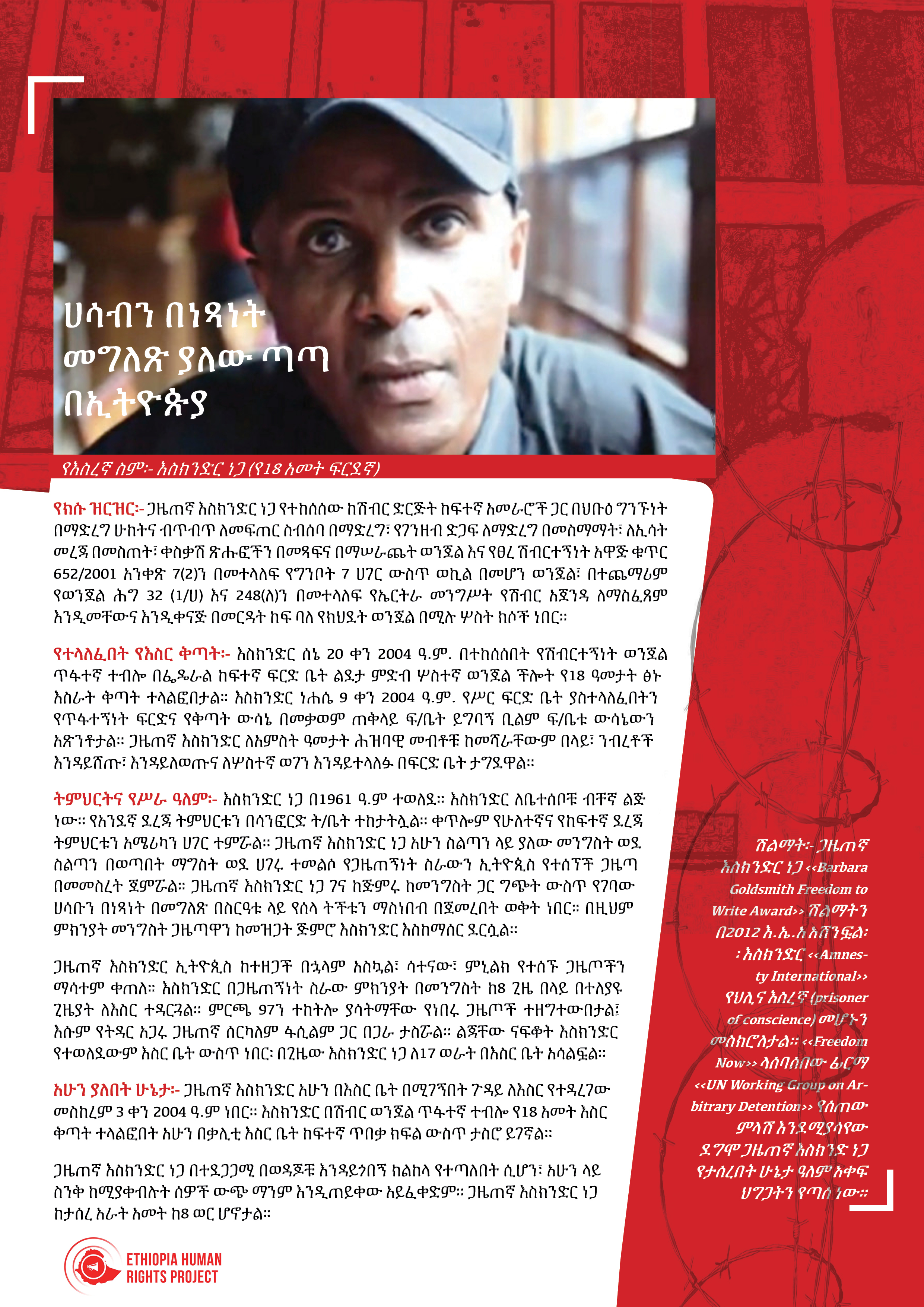 Charge:- Journalist Eskinder Nega was charged for violating Article 7(2) of Anti-Terrorism Proclamation 652/2009 and Article 32 (1/a) and 248(b) of the Criminal Code of FDRE Proclamation No.414/2004, by communicating with the leaders of terrorist group in clandestine, organizing an assembly to incite violence and uprising, giving information to Ethiopia Satellite Television (ESAT), by writing and distributing Provocative articles, by acting as in country representative of Ginbot Seven, by helping Eritrean government to facilitate and integrate its terrorism agenda on high treason.

Verdict- on 27th of June, 2012 the Lideta Higher court on the 3rd Criminal Bench found him guilty, on the same charge of Anti-Terrorism  Proclamation he was accused and sentenced for 18 years of rigorous imprisonment. Even though Eskinder has appealed to the Supreme Court, the court has confirmed the decision of the Higher court on 15th of August, 2012. Journalist Eskinder is banned from his civil rights for five years and He is prohibited from selling, changing and transferring his assets to a third party.

Education and Career: – Eskinder Nega was born in 1969 and he was the only child of his Parents. He has completed his elementary education at Sanford School in Addis Ababa. He has completed his High School and Higher Education in USA. Then, just after a little a while after EPRDF came to power; he came back  home and established a Newspaper called Ethiopis. Eskinder’s relationship with EPRDF led government had been adversarial since the start because if his very critical articles. The government closed the newspaper and put Eskinder in Jail. After the government closed Ethopis, Eskinder has managed to launch Asqual, Satenaw, and minlik Newspapers. He has been in jail eight times because of his journalism career. After Election 2005 his newspapers were closed and were jailed with his wife Journalist Serkalem Fasil. She was forced to give birth to their only child in prison. On this specific time of the arrest Eskinder spend Seventeen months in prison.

Current Situation: – Eskinder’s current arrest started on 14th of September, 2011 since then he is serving his 18 years sentence. He is in kality High security zone. He has been denied his right to be visited by his family and friends. At this time no one is allowed to see Eskinder except a person who delivers for him. Four years and eight months has passed since he was arrested.

Recognition: – Journalist Eskinder Nega has won Barbara Goldsmith Freedom to Write Award in 2012.  Amnesty International has listed his name under prisoner of conscience. Freedom Now has collected and submitted a petition to UN Working Group on Arbitrary Detention and according to the group’s decision that his detention is against international laws.