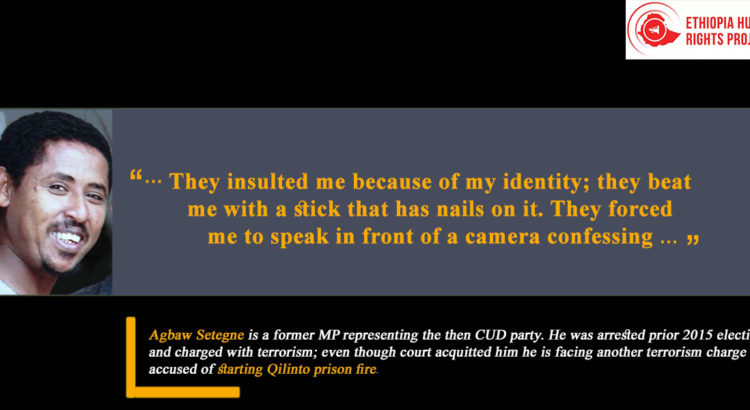 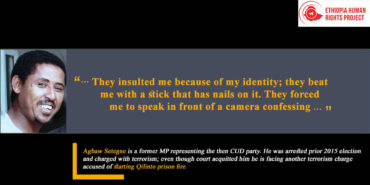 Age: – 38 years old
Address: – Amhara Regional State, North Gonder, Armachiho
Current situation: – Held in Qilinto prison
The reason why I am jailed: – I believe that my arrest was related with the last national election (2015) in which they fear I would win the vote in my constituency representing Blue Party; thus arrested me prior to the election. By the time I was arrested I was advocating for better attention to be given for Ethio-Sudan border land issue.
Prosecutor’s official charge against me:- first, federal prosecutor charged me for violating Article 7(1) of the Anti-Terrorism Proclamation (ATP). The Federal High Court has already acquitted me from this charge after I successfully defended the charge. However, prosecutor has brought another terrorism charge against me on Qilinto prison fire case. I am one of the 38 defendants charged under the charge file of Masresha Setegn.
The following rights violations are committed against me in prison:-
A. when I was in Maekelawi:-
1. I was held incommunicado and banned from any access to legal advice for weeks
2. They interrogated me at nights.
3. They beat me during interrogations.
4. They insulted and humiliated me because of my identity.
5. I was denied medical treatment.
6. I was held in dark room.
B. When I was in Showarobit prison for interrogation to the 2nd charge:-
1. They chained my hands and legs with bed.
2. I was highly beaten during interrogations.
3. They threaten to kill me.
4. They have beaten me using a stick that has nails on it, my legs still hurt from the torture.
5. I was denied medical treatment.
They forced me to sign on a confession I was forced to give.
6. They forced me to speak what they want and video-taped me.
C. in Qilinto prison:-
1. I was held in a dark room for months.
2. I was denied access to see my families and friends.
3. They threatened to kill me.
4. I was beaten by the prison guards.
Background:
I was born in Gondar. I studied law. I have peaceful political participation since my early young times. Accordingly, I participated in the 2005 national elections and won a seat in the parliament representing the then CUD party. As a parliamentarian, I have expressed my opposition to the then draft law of the Anti-terrorism law saying that it would be very repressive if endorsed as it was. Now I am charged with that law for second time for speaking my view.