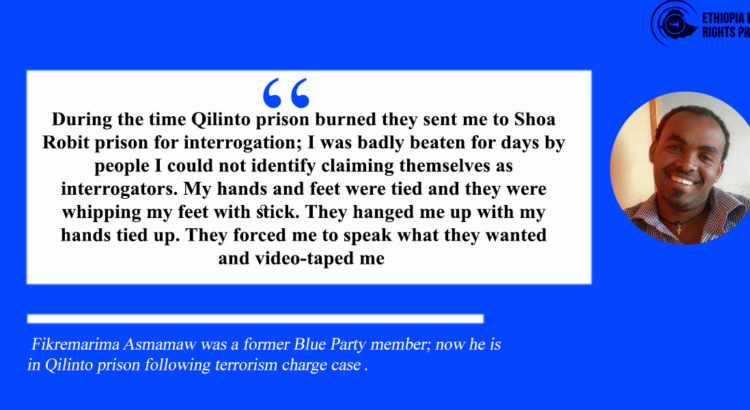 Age: – 32 years old
Address: – Addis Ababa
Current situation: – held in Qilinto prison
The reason why I am jailed: – They arrested me for my political participation. They said I was suspected of terrorism.
Prosecutor’s official charge against me:- I was charged by federal prosecutor for violating Article 7(1) of the Anti-Terrorism Proclamation. I am serving four years imprisonment for this charge. Federal prosecutor has also charged me with terrorism under the Qilinto prison fire case with 37 other defendants under the charge file of Masresha Setegn.
The following rights violations are committed against me in prison:-
A. in Maekelawi
1. I was held in dark room.
2. I was held incommunicado for long time
3. They insulted and threatened me during interrogations.
B. in Qilinto & Showarobit prisons
1. I was badly beaten for days by people I could not identify claiming themselves as interrogators.
2. My hands and feet were tied and they were whipping my feet
3. They tied up my two fingers together with thin rope for long while being interrogated
4. They hanged me up with my hands tied up.
5. I was insulted and harassed in all time of the interrogation
6. I was chained day and night
7.They forced me to speak what they wanted and video-taped me.
8. They spited on me, pulled and removed my beard.

I was born in Addis Ababa. I attended my schools in Addis Ababa. I was doing advertisement works which I owned until my arrest. I was Semayawi party member. I frequently visited political prisoners prior to my arrest. These helped me see the rights violations of prisoners in Ethiopia. These violations are happening on me now. The second charge has been brought against me despite the fact that I was already transferred to Zeway prison weeks prior to Qilinto prison fire. Date:Jul 19, 2017