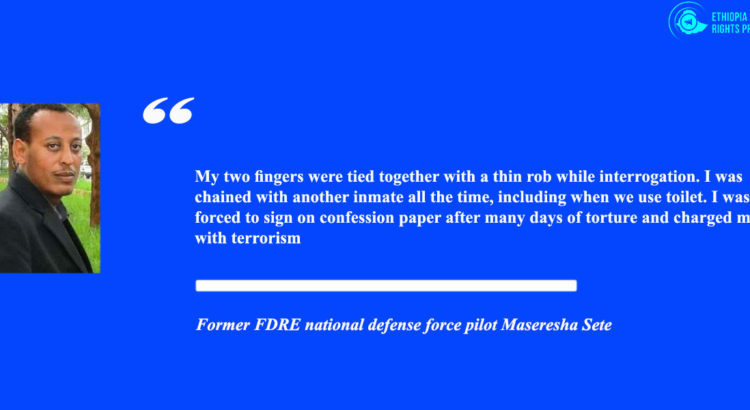 Name: – Masresha Setegn
Age: – 34 years old
Address: – Dire Dawa
Current situation: – held in Qilinto prison
The reason why I am jailed: – They said I was suspected of terrorism
Prosecutor’s official charge against me:- Federal prosecutor accused me of violating Article 7(1) of the Anti-Terrorism Proclamation (ATP) and violating criminal code for betraying the defense force without returning the guns I was armed as member of the air force. I was sentenced 10 years imprisonment recently for this charge. On the other hand, prosecutor charged me with 37 other defendants for having participation in Qilinto prison fire. I am first defendant on that case
The following rights violations are committed against me in prison:-
A. in Maekelawi interrogation bureau
1. I was held in a dark and cold room.
2. I was held incommunicado for long and was denied of visitors ( lawyer and family members)
3. I was being threatened and insulted during interrogations all the time
They interrogated me at nights too.
B. in Qilinto & Showarobit prisons:-
1. I face death threats on interrogations, they always tells me that I will be dead if I do not collaborate
2. I was badly and frequently beaten by people who are not part of formal police and other law enforcement employees.  They wear civilian closes and claim to be interrogators
3. My two fingers were tied together with a thin rob while interrogation.
4. I was taken out of interrogation room and was beaten on fields, my face was wounded and I was told that I will not leave the compound alive. I was threated to death in all interrogations.
5. I was humiliated and insulted all the time.
6. I was tied (chained) day and night. At nights, I was tied up with a bed.
7. They pulled my hair and told me that I am nothing on face of government power
8. I was told what I should say and they video tapped me.
9. I was chained with another inmate all the time, including when we use toilet.
10. I was forced to sign on confession paper after many days of torture
I was born in east Gojjam. I attended my schools in Gojjam. Until I got arrested, I was working as a pilot of the FDRE national defense force, air force division. I was living in Dire Dawa city.