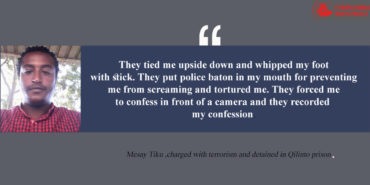 Name: – Mesay Tiku Waqjira
Age: – 29 years old
Address: – Gebra Guracha town, North Showa zone of Oromia Regional State
Current situation: – held in Qilinto prison
The reason why I am jailed: when they arrested me they claimed that I was trying to travel abroad to join Patriotic Ginbot 7 political group, even though the arrest happened while I was at work place.
Prosecutor’s official charge against me:- Federal prosecutor accused me of violating Article 7(1) of the Anti-Terrorism Proclamation (ATP). I was recently sentenced for four years imprisonment On the other hand; they also charged me with 121 defendants for having participation in Qilinto prison fire.
The following rights violations are committed against me in prison:-
A: In Maekelawi
1. I was badly beaten by the security people while I was arrested.
2. Similarly, they beat me during my stay at Maekalawi interrogation Bureau.
3. They were asking me why I joined ( which I did not) Ginbot 7 while my ethnic back ground is Oromo
4. I was held incommunicado for weeks
5. I took forced confession and made me sign
6. They insulted me repeatedly.

B: In Qilinto and Showarobit prisons
1. After my hand and foot being chained I was foot whipped by interrogators
2. They put police baton in my mouth for preventing me from screaming and tortured me .
3. I was beaten for asking to read the confession they have wrote and asked me to sign on.
4. They forced me to confess in front or camera and they recorded my confession.
5. They insulted me again and again based on my identity.
6. They chained me with wood.
7. They paired me with an inmate by chain and forced us to use toilet together without unchaining our hands.
8. I was held in a dirty place without getting water for days.
9. I was forced to sign on a confession that I gave by torture.
I was born and raised in Gebre Guracha twon of Oromia region. I have participated in peaceful and legal political movements since 2010. Accordingly, I was a member of Unity for Democracy and Justice Party.