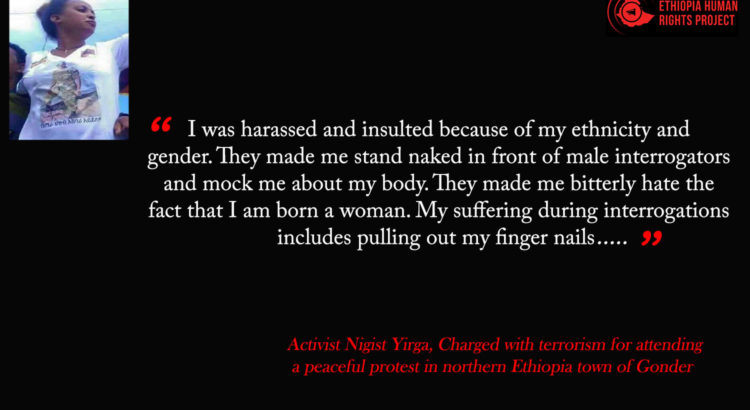 The reason why I am jailed: – For participating in peaceful public protests in Gondar of Amhara regional state.
Prosecutor’s official charge against me:- Federal prosecutor charged me and five others with terrorism. Prosecutor indicated in the charge that I was responsible for organizing and leading the Amhara protests in north Gondar having involved in terrorist organizations. Being the 1st defendant among other five on terrorism (Violation of ATP, article 3/4/6) charges brought on me; I am now attending court hearings at the 4th criminal bench of the federal high court Lideta branch.
The following rights violations are committed against me in prison:–
1. I was imprisoned in dark and cold room in Maekelawi for days.
2. My families did not know my whereabouts for days
3. I was detained incommunicado for weeks and I am still detained far away from my home town.
4. I used to be called for interrogations at nights.
5. I was harassed, threatened and insulted because of my ethnicity and sex.
6. They made me stand naked in front of male interrogators and mock on my body. They made me bitterly hate the fact that I am born a woman.
7. My suffering during the interrogations includes pulling out of my finger nails.
8. Hair pulling and other similar tortures has also been my day to day experience
9. I am now in Kality prison since prosecutor officially charged me. But the rights violations have not yet stopped here too. Anyone who would like to visit me at Kality is not allowed except fewer people on name list that are available at the prison administrator’s hands. I can only be visited for 30 minutes from 12:00 am to 12:30 am.
I was born in Gondar. I went to school there in Gondar. I have seen the human rights violations and sufferings committed against prisoners at Kality and Qilinto when I came to Addis Ababa to visit relatives and also visit these prisoners who are from Gondar remote areas. I was very touched by what I have seen which I think to stand and speak for these people’s rights is what is expected from me.
Accordingly, I started to participate in public protests to demand the respect of rights. I participated at the July 2016 public protest held in Gondar following the accusation of Colonel Demeke Zewdu, founder of the “Wolkayite Amhara Identity Question Committee”, with murder and terrorism. Wearing a T-shirt with a slogan ‘The Amhara People are not Terrorists!’ I was at the forefront at the demo exercising my constitutionally guaranteed rights of participating at peaceful demonstration.
It is for such peaceful activities that I was kidnapped by the federal police and government security people and thrown to jail in September 2016.