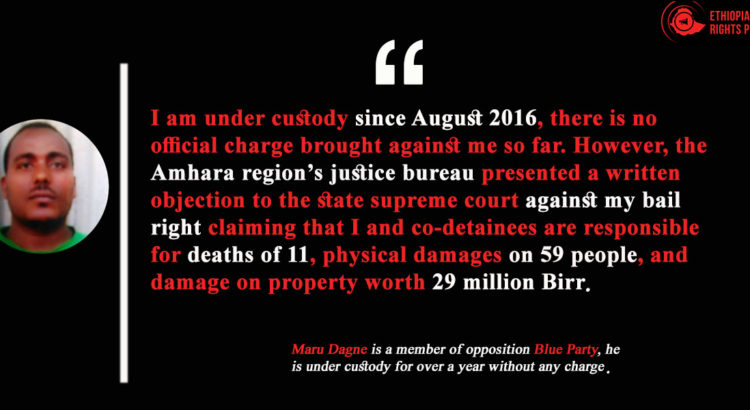 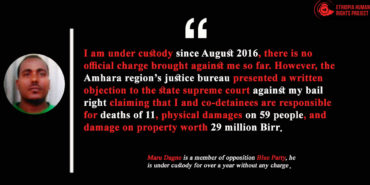 The prison where I am jailed now: – Bahir Dar city administration prison under the Amhara regional state commission for prisons.

The reason why I am jailed: – For organizing and participating in peaceful public protest in Bahir Dar, in late July 2016.

Prosecutor’s official charge against me:- There is no official charge brought against me so far. However, the Amhara region’s justice bureau presented a written objection to the state supreme court against my bail claiming that I and co-detainees are responsible for deaths of 11, physical damages on 59 people, and damage on property worth 29 million Birr. This is how they kept me under custody.

The following rights violations are committed against me in prison: –

I am currently a member of Blue party. I have been participating in politics in a peaceful way since 2005; I have been a member of three different political parties registered and acknowledged by the Electoral Board of Ethiopia (CUD, UDJ, and Blue Party). I do not regret for a single moment for standing in favor of the protection of human dignity and rights. I am a father of three. I have been working at Bahir Dar University and was attending my further education there in the meantime when I was arrested.